Between January 2016 and September 2021, I held a Research Fellow position in the ConFooBio research group at Stirling University, led by Prof Nils Bunnefeld. This was funded by a Horizon Europe 2020 ERC grant, agreement no. 679651.

ConFooBio is a multidisplinary team of conservation scientists, social scientists, and modellers, aimed at better understanding conservation conflicts, that is conflicts between global food security and biodiversity conservation. Doing so is particularly important in a world where pressures to make progress towards a range of Sustainable Development Goals (SDGs) are becoming increasingly urgent, even though some of these goals may themselves conflict. ConFooBio is hugely varied and multidisciplinary, and I have been very lucky to be able to work with and learn from a range of colleagues from very different backgrounds.

My own involvement focused on the continued development and application of simulation tools to problems in conservation conflicts and natural resource management (GMSE), and the application of interactive games acting as the interface between models, data, human decision-making, and management/policy making.
Specifically, my current work is split into a number of sub-projects:

Effects of small wind turbines on birds and bats 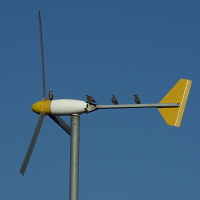 Overall these two projects were focused on building the evidence base of the effect of small wind turbines on birds and bats. While at this point in time, the effects of large wind farms on birds and bats had been relatively well-studied, the effects of smaller, “domestic” wind turbines was mostly unknown, even though (because of differences in siting) they might be quite different to that of larger wind farms.
The first (2009-2011) part of this work was funded by a Leverhulme Grant and included monitoring of bird and bat activity at a local level at small turbines at a range of sites throughout the UK, as well as some experimental manipulation of turbine operation to understand the mechanism of any such effects.
The second project (2012-15) was a University Impact Fellowship, and aimed to assess to what any effects of wind turbine operation or presence translates into the wider landscape. Relevant publications here, here, here, here, and here.

During this project I worked actively with a range of academic and non-academic partners (e.g. Natural England, Nature.Scot and the Energy Saving Trust). This included work on a stand-alone tendered contract for the Scottish Government (through the Scottish Wind Farm Bird Steering Group), which was aimed at assessing the statistical power of upland bird survey methodologies at wind farm sites, using a simulation model approach. In addition, with Kirsty Park I contributed to the EUROBATS guidelines to include a section on smaller wind turbines. 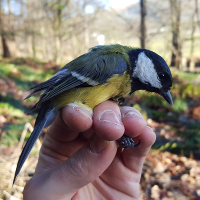 I have held a long interest in how individual animals adapt to changes in their environment, e.g. climate change or disturbance, and how ecology, behaviour and physiology interact to shape that response. In this project, I studied a population of wild birds (Great tits), tracking their feeding- and movement behaviour, and at the same time measuring their physiological stress responses in a standardised way. In this project I collaborated with Prof Karen Spencer at the University of St Andrews.